His Hands Support Ministries is incorporated under the laws of the State of Maine as a 501c3, non-profit, charitable organization. His Hands for South Africa is an all-volunteer ministry program being run by His Hands Support Ministries. These are some of our core principals:We strive to promote unity within the body of Christ - HHSM recognizes the need for unity in the body of believers who all share the common bond of faith in Jesus Christ and have experienced His saving grace. Our fellowship is made up of believers from many different denominations including Baptist, Evangelical Free, Assembly of God, etc. and we have joined together with our brothers and sisters in South Africa to try to make a difference in the lives of the people there who are living in poverty. Our purpose is not to start an American work in South Africa, but to come alongside our South African brothers and sisters to support and encourage them in the work they are already doing. 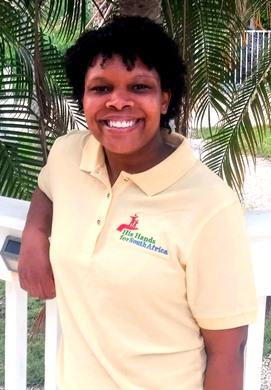 Mary-Ruth Woolridge lives in Clarksville, Tennessee. She has a bachelor’s degree in psychology from Austin Peay State University and plans to start her Master’s program soon. She is currently working as a Mental Health Associate at a residential home for children and adolescents and volunteers her time with His Hands Support Ministries as the South Africa Program Coordinator. Her first trip with His Hands was to Monrovia, Liberia on the continent of Africa.

Her biological parents were missionaries in Nairobi, Kenya where she was exposed to ministry work. While in Kenya, her mom passed away when she was almost five years old, so her dad moved her and her sisters and grandmother to Tennessee. God provided parents in Tennessee to take care of Mary-Ruth and her grandmother when her father couldn’t. She has a heart for those people God loves and wants to serve them.

Mary-Ruth hopes you will consider joining us in supporting His Hands Support Ministries and the children of South Africa!