"Therefore, since through God's mercy we have this ministry, we do not lose heart...But we have this treasure in jars of clay to show that this all-surpassing power is from God and not from us." 2 Corinthians 4:1,7

His Hands Support Ministries is incorporated under the laws of the State of Maine as a 501c3, non-profit, charitable organization. His Hands for Swaziland is an all-volunteer ministry program being run by His Hands Support Ministries. These are some of our core principles: We strive to promote unity within the body of Christ - HHSM recognizes the need for unity in the body of believers who all share the common bond of faith in Jesus Christ and have experienced His saving grace. Our fellowship is made up of believers from many different denominations including Baptist, Evangelical Free, Assembly of God, etc. and we have joined together with our brothers and sisters in Swaziland to try to make a difference in the lives of the people there who are living in poverty. Our purpose is not to start an American work in Swaziland, but to come alongside our Swazi brothers and sisters to support and encourage them in the work they are already doing.

"So Joshua fought the Amalekites as Moses had ordered, and Moses, Aaron, and Hur went to the top of the hill. As long as Moses held up his hands, the Israelites were winning, but whenever he lowered his hands, the Amalekites were winning. When Moses’ hands grew tired, they took a stone and put it under him and he sat on it. Aaron and Hur held his hands up—one on one side, one on the other—so that his hands remained steady till sunset. So Joshua overcame the Amalekite army with the sword." Exodus 17:10-13

Scott Verrill, secretary, and his wife Marilee are currently Pastors at Victory Christian Church (VCC) in Livermore, Maine where they have served in various capacities through the majority of the church’s twenty-year history. Scott holds degrees in Business Administration (ABA), Visual Communication (BFA), and Education (M.Ed.). Scott & Marilee are leading this young church into discipleship and loving service in the local community and participation in world-wide ministry through His Hands. They have four children; Winfield, Dexter (and his wife Rachael), Autumn Waite (and her husband Brenden), and Victor, who will be heading off to college in 2020. Scott & Marilee enjoy time with family, serving at the church, and short trips to locations in Maine and New Hampshire.

Lorraine Mitchell, director, has been married to her husband, Brud, since 1958. They have 4 grown children, Nadine, Doreen, Stephanie & Stephen, 10 grandchildren, and 5 great-grandchildren. Lorraine has served God by being treasurer for her church as well as two other Christian organizations. She has made several trips to Haiti and Guatemala, her first trip being in 2004, and has formed strong relationships with many of her sponsored children as well as with many of her Christian brothers and sisters in those countries. Lorraine currently works giving in-home care to the elderly and attends the Strong Church of the Nazarene in Strong, Maine.

(Hugh) Tim Corbett, director, served in the military service for 32 years, retiring in March of 2019.  He retired as the Assistant Adjutant General-Army with the rank of Brigadier General.  He also practiced law in Waterville, Maine from 1991-2002.  Tim is the recipient of many decorations, awards, and citations for his military service including the Bronze Star Medal, Legion of Honor, NATO Medal, Meritorious Unit Citation, Global War on Terror Service Medal and Afghanistan Campaign Medal    He married his high school sweetheart, Laura, in 1983 and they have 3 grown children, Tim Jr, Jenny, and Ciara, as well as several grandchildren.  Tim and Laura attend Faith Evangelical Free Church in Waterville, Maine. 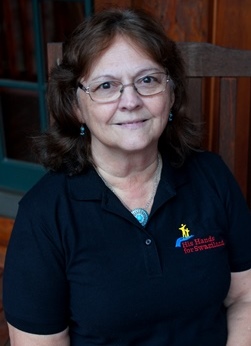 Jamie Dennett has been married to her husband, Scott, since 1980. They have one son. Jamie and Scott attend United Baptist Church of Peru. Jamie is involved with her church’s library, missions committee, and the women's ministry as well as facilitating a Sunday School class. She also works as a librarian at a middle school. Interested in missions for many years, she made her first mission trip to Haiti in 2000. She has been involved with His Hands Support Ministries since its early days, sponsors children in several His Hands programs, and has been part of numerous teams. Jamie has served as a coordinator since 2010 and is currently the Eswatini coordinator.