His Hands Support Ministries is incorporated under the laws of the State of Maine as a 501c3, non-profit, charitable organization. His Hands for Cuba is an all-volunteer ministry program being run by His Hands Support Ministries. These are some of our core principals:We strive to promote unity within the body of Christ - HHSM recognizes the need for unity in the body of believers who all share the common bond of faith in Jesus Christ and have experienced His saving grace. Our fellowship is made up of believers from many different denominations including Baptist, Evangelical Free, Assembly of God, etc. and we have joined together with our brothers and sisters in Cuba to try to make a difference in the lives of the people there who are living in poverty. Our purpose is not to start an American work in Cuba, but to come alongside our Cuban brothers and sisters to support and encourage them in the work they are already doing. 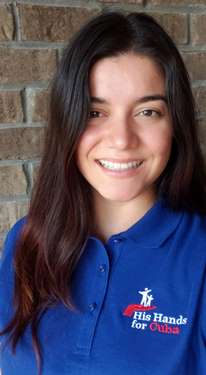 Cherry Martin was born and raised in Miami, FL, although her family is originally from Honduras. She moved to the Florida panhandle when she married her husband in 2009. She enjoys spending time with her family, which includes two children, three dogs, and several hens. Cherry is currently pursuing her Bachelor’s in Health Science and a Minor in Biology. She plans on attending medical school soon after to become a Doctor of Osteopathic Medicine. When not with family or in school, Cherry enjoys volunteering. She serves as a preschool teacher at her church and has also been a Guardian Ad Litem for several years. Cherry enjoys serving with His Hands Support Ministries and has been to Haiti a couple of times. She is excited to see God moving through the ministry in Cuba.